The Department of Mining, Metallurgical and Materials Engineering (DMMME) hosted a Professorial Lecture in a hybrid format that featured newly-retired professor, Dr. Herman Mendoza last December 2, 2022. The event was held at the DMMME Theater.

Fondly called Prof Judge in the UP Engineering community, he retired from faculty work effective the end of AY 2021-22. DMMME requested him to deliver a valedictory lecture, the topic being on Surface-Chemical Separation of Ultrafine Particles in Dilute Suspension.

The hybrid event was attended by Prof. Mendoza’s past and current students and mentees (that included the DMMME faculty). It also highlighted his contributions to the UP and to Philippine society. Easily the most noteworthy was the Department of Science and Technology (DOST) – funded project CLINN-GEM, which stands for Community-Led Integrated Non-Cyanide Non-Mercury Gold Extraction Method that started in 2015, The CLINN-GEM Technology for People’s Empowerment and Participation earned the 2021 Gawad Tsanselor sa Natatanging Programang Pang-Extension. This is being implemented in four sites in remote mining communities, replacing environment-destructive practices carried out by small miners.

Prof Mendoza was the holder of the Philex Mining Corporation Professorial Chair for over 20 years. He had used the cash award to help support the field/lab projects of his undergraduate students.

As an added part of the program, which was attended by Prof. Mendoza’s wife and their family, UPERDFI ED Tito Aliga handed over to Prof. Mendoza a copy of the UPERDFI Golden Anniversary Book.

We look forward to newly-retired professors delivering their Valedictory Lectures! (This is different from the annual Professorial Chair Colloquium.) 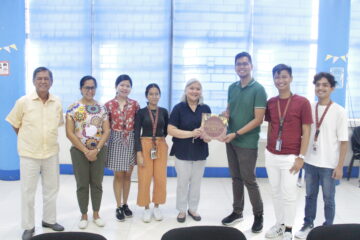 The UP Alumni Association in British Columbia started with 2 scholars in AY 2021-22 and increased its support with four additional scholars this AY 2022-23. On December 1, UPAABC vice president Jasper Mallonga (ME Class Read more… 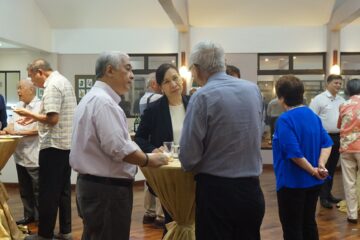 UPERDFI members gathered for the Membership Engagement Launch on November 29, 2022, at the Wack Wack Social Hall, Mandaluyong City. After catching up with one another over cocktails, the program was formally opened by Chairman Read more…

Mamerto E. Tangonan Is UPAE’s Most Distinguished Alumnus Awardee in 2022